In all these years of being in a working traveling band, we often compare what we do to other occupations. We compare ourselves to explorers, pirates, truckers and recently politicians on the campaign trail. There are many similarities between the life of a traveling minstrel to that of a politician, especially when on the campaign trail – trying to be in as many places as one can, get your message out to as many as you can, thus winning as many hearts and minds as you can. Sure there are others on the campaign trail out there, delivering a message that can contradict yours, but often as not, it is in agreement with yours, and alliances can be forged. Some seem to hit a nerve with the public and achieve tremendous popularity while some fade into obscurity or never make much impact at all. It seems at this time, one that belongs in the former category would be The Grand Old Party’s own: Donald Trump. Agree or disagree with his policies or opinions, there’s no denying that he has hit a nerve with the public. He is, as I write this blog, ahead in the Republican polls by a significant margin and his impact on this current race for the presidency as well as politics in general cannot be denied. It’s only fitting that the day after the Republican debates aired on Fox News, the news station lauded by some as the only true news source, that yours truly was riding through rural Maine to try and win the lobster loving Mainers over to our way of thinking, when we spotted a roadside yard sale, ran by ordinary Maine folk looking to unload some excess kitchen wares, appliances and one Donald Trump action figure!! We couldn’t believe our good fortune, and it was truly a sign that we had some sort of purpose on this tour, that this tour would be more than just music, that this tour would be about making America great again, bringing hope to the hopeless, good to the goodless, and repair this broken system.This tour would be about bringing back America’s greatness that it never really lost. We’ve been reading the slogans that Donald Trump is America’s last hope, but we would like to make a case for our 14″ version of Trump – also known as “Lil Don.” So keep your eyes and ears open America, Lil Don will be coming to your state, just as long as The Revelers have gigs booked there. Nothing can stop this campaign that will make our country great again- not Mexico, not Hillary, and not even the actual Donald Trump.

Join Lil’ Donald on his tour around the U.S.: 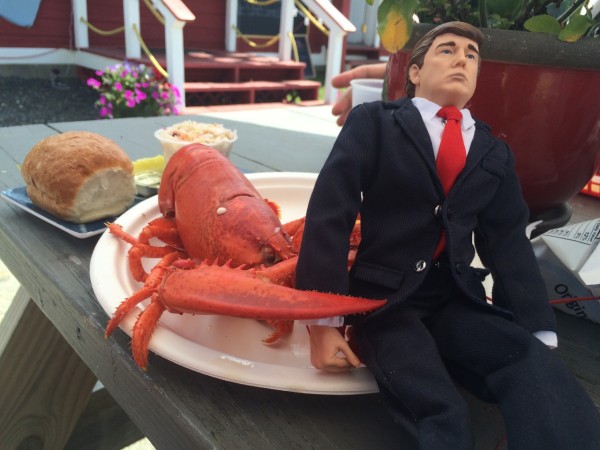 The Red Lobster Scare
On the coast of Maine we had a scare that could have halted Lil Donald’s campaign before it even really began, when a Red lobster came on shore and clutched Donald in his claws. We managed to free Lil Donald, but it made a case for Lil Donald’s immigration policies. You see this lobster was not born on American land but nonetheless was allowed on our shores by our lax immigration laws that encourage dangerous action figure eating lobsters as well Hispanics and other illegals onto our sacred soil. We suspect this “Red” Lobster was sent by the Mexican government or possibly the Chinese in an ongoing effort to send rogue lobsters to our country. Lil’ Donald came up with a plan: “we will surround the shores of our country with a huge net that would protect us from such menaces to our Liberty. Of course, there will be an opening on the net that would give passage to crustaceans looking to work hard and make an honest living”.

On the day shortly after launching his campaign to take back America, Lil Donald spotted these young entrepreneurs in sleepy Saunderstown Rhode Island. “That’s what I’m talking about!!” he exclaimed, “I’ll take two!!” He then borrowed the money from Chris Miller who couldn’t wait to get in on our first purchase together. Lil Donald and I drank the lemonades, our thirst quenched by cool, sugary, refreshing liquid. Chris looked on as we gulped them down somewhat longingly and confused as to why he had no lemonade for himself. Lil Donald explained to him that he was better off in the long run for not having any cool refreshing lemonade now, as that would make him lazy and ruin his desire to work in the future. He then asked the young entrepreneurs “how much for the whole company?.” “The whole company?” one of the children asked. “I’ll give you two hundred dollars,” Lil Don replied. The young entrepreneurs were a little confused by this until Lil Donald explained to them how much candy and toys they could buy with two hundred American dollars,and told them he would keep them on as consultants if they agreed to the deal. The young entrepreneurs agreed and then it was time to find “investors.” Lil Don explained to Chris Miller how he would need three hundred dollars for this new investment; one hundred of which would be for Lil Donald’s finder’s fee, while the other two would be for the actual purchase of the company, since Lil Donald’s billions were all tied up in liquid assets. Chris was a tad skeptical at first until Lil Donald made it clear that we would be “farting through silk” a year from now once we turned this company around, and then sold it for a hefty profit. Chris immediately hocked his tenor saxophone to get the cash. A half an hour later the lemonade company was purchased. Donald wasted no time in sacking the employees, selling the lemons and sugar back to the children’s parents at half the cost. He then declared the company bankrupt and filed Chapter 11. Chris was a little distraught about having hocked his instrument and now having absolutely nothing to show for his investment, but it was worth it for a priceless lesson on how the market actually works. The children were a tad miffed themselves, but good old Lil Donald explained to them how this was all really the fault of the Chinese children who would work for lower wages, and were thus shipping their jobs overseas.

Note from the webmaster: Our measly independent band-sized servers can’t handle the extreme popularity of Lil’ Donald – so for continued updates please visit him on his own site: http://lildonald4prez.tumblr.com