“The drives are long,the hours are horrendous, the money’s dreadful, but hey, we get to eat in gas stations.”
Gerry Rouche

Glasgow
We’ve just returned from the Highlands of Scotland and are currently at the Travelodge hotel by the Glasgow airport. On this tour we’ll be lucky enough to stay at luxurious  Travelodges across Scotland. Yesterday was a driving day, one of two days off in two and a half weeks. We had to make a stop by Loch Ness to see the famed “Loch Ness Monster” 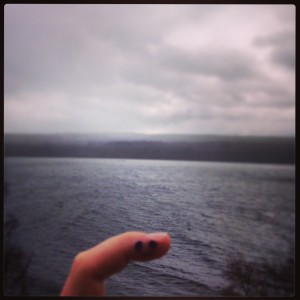 We didn’t find Nessie the monster but we did find the gift shop, along with tourists from all over the world. In a way I’d rather go to the site of something that may or may have not ever existed, rather than some boring battle site or ostentatious castle that is just a reminder of humankind’s often grim reality. I personally prefer a story has been created, and exists very much in our imagination. It reminds us that there is still mystery in this world. Be it real, or be it a hoax, we’re still interested all the same. What are we looking for? Is there some sort of myth with just enough promise of being plausible enough that we continue to pursue even when at times it seems completely ridiculous. It makes me question the nature of my own existence. What is it we look for all these years and miles traversing the globe? Why can I not be simply satisfied with a real job, my own house, a good cajun girl, and a garden?These are the sort of questions ones asks on a five hour drive, while staring out the window of a sprinter van at Loch Ness.
We are driven by our trusty tour manager Gerry. Gerry has been on the road for almost thirty years, one person who can safely say he’s seen more highway and more hotel rooms than any of us. His resume includes, among many other things, having run the mechanical fish for the band Fishbone during the Lollapalooza tour in the early nineties. This took place when we were learning our instruments and dreaming of being folk heroes.
Gerry has a salty disposition which is actually quite comforting in it’s consistency. One doesn’t know whether it stems from dealing with whiney brats on the road all these years or the fact that the sun shines about fifteen minutes a month here. Unlike typical temperamental, moody, and often high maintenance musicians (especially me), Gerry’s mood is even keel, ranging from cantankerous to surly, but you can count on him (mostly) and you know he isn’t affected by your interpersonal human dynamics. His countenance is solid and if you get lost in some sort of self pity rabbit hole, tourist trap or an after hours pub you’re reminded of the three rules that serve as a guide on our journey as laid down by trusty Gerry
Rule Number One: “Get in the van” (also referred to as the ‘fun box’)
Rule Number Two: “Get out of the van” and of course
Rule Number Three “Quit your whining, get on stage and make me some goddamn money”
Ah yes, it’s good for us kids to have some structure in this world and especially on tour. When we’re pulled in every direction by distractions and monsters like the mysterious Nessie who continue to both mystify and elude us at every step. We pursue it with boundless curiosity and vigor, regardless of the fact that we would have no idea what to do with it if we actually found it, if it even exists at all.
As I sit musing  in the Travelodge lobby, I can see Gerry coming through the front door and I know it will soon be time for rule number one.